The Terror, by Dan Simmons

I’d never heard of Dan Simmons before, until I found one of his books in my local second hand bookshop. It was spine out on the shelf, in the Fantasy/Horror/Science fiction section. How these three distinct genres manage to get lumped together in one, I don’t know. Perhaps the fact that Historical Romance has its own floor to ceiling set of shelving is because of its popularity, but surely it wouldn’t take much effort to give a shelf or two to Horror, and the same again to Fantasy, etc.They might not be as popular, but these individual genres still deserve their own spots in the shop. Anyway, I digress.

As I said, the book was spine out on the shelf, but it stood out for two reasons. The first is that, at over 750 pages, it was one hell of a thick spine. And the second reason it caught my eye is that title: The Terror. 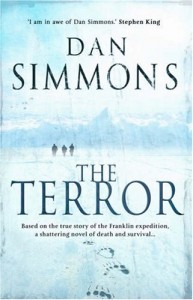 This big, fat novel is a fictionalised account of Captain Sir John Franklin’s lost expedition to the Arctic to force the North West Passage, in 1845 – 1848. Franklin was in charge of two ships, HMS Erebus, and HMS Terror, both of which were lost, with all their crew. Possible theories about the deaths of the 24 officers and 110 men, include scurvy, hypothermia, starvation and lead poisoning brought on from the poorly soldered cans of food, commissioned by the Admiralty for the long expedition.

So, a rousing historical adventure novel about the hardship of life in the Arctic, and the bravery of the English under incredibly dangerous and hostile conditions. What’s it doing in the Fantasy/Horror/Science Fiction section then?

Because in Dan Simmons’ retelling of the tale, The Terror does not refer to the ship named so, but the thing on the ice that is hunting them down, and picking them off one by one.

We start the book at the midway point in the narrative, the two ships locked in place in the frozen Arctic sea, and having been trapped in that way for almost two years. The temperature is -50 degrees, and a man’s eyelids can freeze open if he stays too long out on the deck. We are introduced to Captain Crozier who, it turns out, will be the main character in a book full of distinctive characters, almost all male, apart from the mute Eskimo woman, nicknamed Lady Silence.

Crozier is summoned below deck to the Hold, where there have been reports of strange noises, attributed to the ghosts of the crew who have already died. But Crozier doesn’t believe in ghosts, and he suspects the real reason for the noises is far more terrifying. Down in the dark, rat infested bowels of the ship, Crozier and the ship’s carpenter discover that the hull has been breached.

The freezing air from outside rushes in so quickly that it almost extinguishes the lantern. Crozier has to shield it with his free hand to keep it flickering, sending the men’s shadows dancing across decks, beams and bulkheads.The two long boards from the outer hull have been smashed and bent inward by some inconceivable, irresistible force. Clearly visible in the light from the slightly shaking lantern are huge claw marks in the splintered oak — claw marks streaked with frozen smears of impossibly bright blood.

The Terror is an incredibly well written novel. There were times when I was convinced that I could feel the cold of the Arctic winter, and hear the groaning of the shifting ice as it slowly pulverised the two ships, rendering them unfit for sailing even if the long awaited spring thaw finally arrived.

Simmons piles on the tension, threading his way through a narrative that jumps back and forth in time, before settling on a straightforward account of the remaining survivors’ desperate trek across the ice, pulling sledges laden down with their dwindling supplies, as they abandon the ships and make a last attempt at reaching safety.This would have been a thrilling enough novel without the addition of a supernatural monster, and yet this fantastical element to the plot is woven skillfully in with the historical detail and well drawn characters of the book’s protagonists.

But, it is one hell of a long book, as noted by the reviewer in The New York Times, who said that reading The Terror ‘…won’t kill you, unless it falls on your head.’

Don’t let the length put you off, though. Or the fact that, according to history, all of the crew and officers aboard Franklin’s ill-fated expedition died. The mythical creature of the title is not the only antagonist in this massive novel, and, despite my fears to the contrary, there is a suitable, satisfying ending to the story.

Click on the link below to get yourself a copy.