The Screaming Mimi, by Fredric Brown 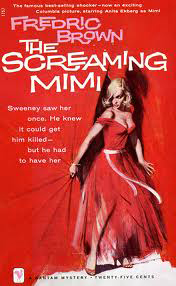 Written in 1949, The Screaming Mimi

is probably Fredric Brown’s most popular book. It is certainly one of my favourites. I first discovered it in my early twenties, back in the days when I used to browse the bookshelves in real bookshops, rather than virtual ones. Remember those times? It was also around about that time I also discovered Raymond Chandler

, and his tough, cynical, knight in shining armour, Philip Marlow.

Brown’s protagonist, William Sweeney, a reporter for the Chicago Blade shares much with Marlow. He is a tough guy, mixes with some pretty disreputable characters, has a soft spot for the ladies, and is quick with a sarcastic comeback.

The Screaming Mimi is set in the 1940s, during an oppressively hot Chicago summer, as a knife wielding serial killer, dubbed The Ripper by the newspapers, is terrorising the city..

Coming down from one hell of an acloholic bender one night, Sweeney is drawn by a crowd to a hotel doorway. On the other side of the glass door a beautiful blonde woman is lying face down on the floor, a large dog (It must be a dog, here in Chicago; if you’d seen it out in the woods you’d have taken it for a wolf) crouching over her. The police arrive, intending to shoot the dog, but then the woman slowly climbs to her feet, a knife wound visible in her abdomen. The astonishing scene that follows next sets Sweeney on his path to sobriety, and a date with a killer.

The blonde woman, Sweeney later learns, is stripper Yolanda Lang, and The Ripper’s intended fourth victim. The dog is called Devil, and performs as part of her act. Yolanda only received a shallow stab wound to her stomach, the ferocious, loyal dog having protected her from further harm.

The book’s opening hook is irresistible, and the language remains a constant throughout the story.

You can list them in their order of probability. The likely ones are easy: He might go after another drink, start a fight, make a speech, take a train…You can work down the list of possibilities; he might buy some green paint, chop down a maple tree, do a fan dance, sing “God Save The King”, steal an oboe…You can work on down to things that get less and less likely, and eventually you might hit the rock bottom of improbability: he might make a resolution and stick to it.

I know that’s incredible, but it happened. A guy named Sweeney did it once, in Chicago. He made a resolution and he had to wade through blood and black coffee to keep it, but he kept it.

Sweeney’s resolution, after seeing the beautiful Yolanda Lang, is to spend a night with her. He quickly determines the best way to do this would be to catch her attacker.

Sweeney soon makes a connection between the killer and a ten inch high statuette sold to him by his first victim in a gift shop. The statuette is called The Screaming Mimi. This is not only a play on the phrase to have the screaming meamies, but here also a mnemonic for the clerk working at the company that produced the statuette, its catalogue number being SM 1.

Here is Sweeney’s first encounter with The Screaming Mimi –

He saw what Reynarde had meant. Definitely there was a virginal quality about the slim nude figure, but that you saw afterward. “Fear, horror, loathing,” Reynarde had said, and all that was there, not only in the face, but in the twisted rigidity of the body. The mouth was wide open in a soundless scream. The arms were thrust out, palms forward, to hold off some approaching horror.

Sweeney buys the statuette, believing the serial killer to have kept the other copy sold to him by his first victim.

To reveal more of the plot would ruin it. The narrative is propelled along at a fast clip, mainly by the smart, wisecracking dialogue –

“Stella Gaylord was a B-girl on West Madison Street. The Lee girl was a private secretary.”

“How private? The kind that has to watch her periods as well as her commas?”

– and the swift exchanges between the characters, many of whom mistrust each other.

Sweeney took another sip of his drink. “You know, Doc, I hate you so damn much I’m beginning to like you.”

“Thank you,” said Greene. “I feel the same about you.” 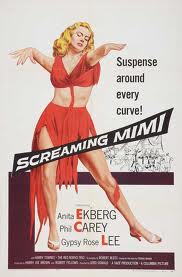 Throughout much of the story, Sweeney is suffering from a hellish hangover. He has to work hard to keep on top of his game, especially when he discovers his straight edged razor has been stolen from his apartment. Does the killer know Sweeney is on to him? And can Sweeney discover his identity before he kills again?

The Screaming Mimi is a product of its time, the characters’ dialogues littered with casual racist remarks, homophobia and misogynism.

When looking at the statuette’s contorted, fearful figure,, a bartender remarks to Sweeney, “No dame is that afraid of being raped or something.”

Sweeney finally achieves what he set out to do, and finds The Ripper, but there’s a twist, propelling Sweeney back to the bottle, where we found him in the first place.

I’ll leave you with one more excerpt, where Sweeney and Captain Bline, in charge of The Ripper investigation, with one of his cops, have gone to see Yolanda Lang’s act in a scuzzy, downtown night club.

Still half-crouched, the dog took a stiff-legged step toward the woman. He snarled again and crouched to spring.

There was a sudden, quick movement across the table from him that pulled Sweeney’s eyes from the tense drama on the stage. And at the same instant that Sweeney saw the movement, Bline’s big hand reached across the table and grabbed Guerney’s arm.

There was a gun in Guerney’s hand.

Bline whispered hoarsely, “You Goddamn fool, it’s part of the act. He’s trained to do that; he’s not going to hurt her.”

Guerney whispered back. “Just in case. In case he does jump her. I could get him before he got her throat.”

“Put back that gun, you Goddamn sap, or I’ll break you.”

The gun went slowly back into the shoulder holster, but Sweeney saw, out of the corner of his eye, that Guerney’s hand stayed on the butt of his gun.

Bline said, “Don’t get trigger-happy. The dog jumps her; it’s part of the act, Goddamn it.”

Guerney’s hand came out from under his coat, but stayed near his lapel. Sweeney’s eyes jerked back to the stage as a sudden intake of breath from the audience backgrounded a yip from a woman at a table near the stage, a yip like a suddenly stopped scream.

The dog was leaping.

The novel was also made into a film of the same name, and inspired Dario Argento’s

giallo classic, The Bird with the Crystal Plumage.