I’m going off topic today because I’m angry about something.

Before we get into that I want you to watch this short video.

Those things I was holding? They are water balls. You can eat them. Or drink them. Whatever.

But yes, you can pick one up and roll it around in your hand like you saw me do there and then you can pop it in your mouth and bite it and you’ll get a nice drink of water.

My twelve-year-old son made these. He found a YouTube tutorial. He went and sourced the ingredients he needed on the internet, persuaded me to part with some cold, hard cash in return for said ingredients and then he made some water balls.

And I think that’s pretty incredible. He’s been researching edible plastic. He’s twelve. He knows all about plastic pollution. He knows we need to find a solution.

And then he goes and makes these edible water balls.

He’s not a scientist. He doesn’t have a Tony Stark style lab at his disposal.

And now I’m thinking to myself: Wait a minute! What the hell is going on here?

You know, we’re living in some very strange times at the moment. If you read the newspapers or watch the news on TV, or follow social media, you’re probably thinking to yourself that planet earth is doomed. We’re going to Hell in a handbasket baby, and there ain’t no stopping it, no sirree, that momentum’s got too much power behind it to slow up now.

We’ve got climate change, we’ve got plastic filling our oceans, we’ve got endangered species, forests disappearing, a raging diabetes epidemic, and there’s going to be far too many people to fit on our planet in the very near future.

My twelve-year-old son made edible water balls in our kitchen using ingredients he bought off the internet out of his pocket money.

Doesn’t that suggest something to you?

Doesn’t that maybe make you think that possibly, just possibly, we already have the answers to many of the problems we are currently facing?

Well, actually, we do. 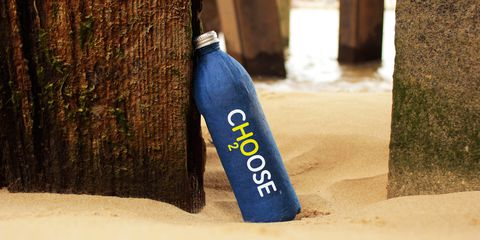 For example, Choose Water have developed a plastic free water bottle. No matter where these bottles end up, the ocean, landfill, they biodegrade within a few months and don’t leave behind toxic micro-particles or heavy metals. And they donate 100% of their profits to Water for Africa.

But what about climate change? This one’s a kick in the unmentionables for sure, isn’t it? There’s no way we’re dodging this particular bullet.

Well, yes and no.

Certainly I believe that the adverse effects of man made climate change are already starting to happen, and have been seen for some time. And it’s only going to get worse.

For the time being at least.

But work is being done, and the technology is becoming available, to save the planet and ourselves in the process.

A very quick search on the internet found lab grown meat, nuclear-fusion-energy power plants and a carbon capture power plant that can remove far more CO2 per acre of land footprint than trees and plants and then turn it into energy.

And this is just the tip of the iceberg.

We have the means to save our planet and to make it a wonderful place to live for everyone.

So why isn’t it happening?

Or rather, why isn’t it happening at a faster rate?

Well, as much as I hate pointing the finger at other people because, well, it’s usually a bit more complicated than that, I’m going to do it anyway.

When our government could have spent its valuable time working to make the lives of its citizens better, especially those at the lower end of the income scale and those without homes, and when they could have been examining how we as a nation could work more cooperatively with other nations to tackle those big problems we are facing, what have they been doing instead?

Well, I’ll tell you. They’ve spent almost three years fucking about with this stupid pile of shit called Brexit. And Lord knows how much money they have spent on it.

Bloody hell, don’t they realise they are supposed to be governing us?

That we elected them to keep order and to provide jobs and security?

Talk about climate change! How many times has Theresa May been flown to meetings in the EU to debate the fucking Irish Backstop!? (I don’t even know what that is! Do they? Does anybody? Because that’s all anyone seems to talk about these days.) Think of all the carbon that has been chucked into the atmosphere.

And am I the only one who feels like this country is currently being run by a bunch of incompetent, self-interested bigots?

But that’s how it feels right now.

That’s how it feels.

And don’t get me started on Donald Trump.

On the positive side, all this stupid shit that is going on right now within the organisations of our respective governments has brought me to the realisation that actually, left to our own devices, most of us just get on with our lives. It’s almost like we don’t need governments.

And I think, at the end of the day, there’s a pearl of wisdom in that statement.

Let me tell you about Choose Water again. The company head, James Longcroft, set up Choose Water with the intention of selling bottled water at music festivals and other big events and then donating 100% of the profits to Water for Africa. This is amazing by itself, but James soon realised that, even with these good intentions, he was contributing to the problem of plastic pollution in the oceans and that didn’t fit with his ethical mission.

He stopped ordering plastic bottles and began researching a biodegradable alternative. They lost a lot of revenue, and James survived by designing websites for clients in the evenings and at weekends, while he spent his days developing a responsibility-free waterproof bottle. He spent a year and a half doing this, in the kitchen in his Edinburgh home and, in his words “…it was a right faff.” He had two small fires, an explosion, and he “… bled more than I thought humanly possible.”

But he did it.

And can we back up a moment there?

He did it in his kitchen.

I love and respect people like this, the awesome ones who live their lives ethically and kindly and generously.

And this is something we can all do.

We can take responsibility for our own lives, and always seek to look after, and be kind to, each other.

Because when you’ve got individuals like the ones innovating and giving at Choose Water, and the many thousands of others, maybe even millions, just like them around the world, then I think we’ve still got more than a fighting chance to save the planet and ourselves in the process.

After all, if my twelve-year-old son can make edible water balls in the kitchen sink now, what’s he going to be capable of when he’s an adult?

What are we all capable of?