I Love Writing. I Hate Writing.

Does that make sense? (If it does, you’re a cleverer person than I am.)

Starting work on a new novel is an exciting time for an author. There is a whole universe of possibilities to play with, an endless array of characters to populate the story with and all sorts of outlandish situations ready to be conjured up with a tickle of the fingers on the computer keys.

Oh yes, I sometimes think this must be how God feels.

But, only a few pages in, and that feeling of crazed omnipotence can quickly begin to fade. In fact there are some days when it disappears like a smile after being slapped across the face. Not that that has ever happened to me you understand. Just in case you were wondering.

So, let’s reduce this to numbers shall we?

Now, the average number of words on the average page of an average length novel (I know, I know, far too many averages in that sentence) is between 300 and 500. So you can see that losing the impetus to keep writing when only a few pages into a new novel is kind of terrible and rather tragic.

Because, you know, there’s still a long way to go to the finish line.

And, unlike a marathon, there’s nobody on the sidelines cheering the author on as she works her way through that dreaded word count day after day.

American crime writer Lawrence Block once said, “I love the idea of writing and I love having written, but I hate the actual writing.”

And I don’t think he’s the only one to have voiced this complaint.

So maybe you can see now why I hate writing and yet why I love writing.

Last week I started work on book four, or as I like to call them seasons, Season Four of Joe Coffin. 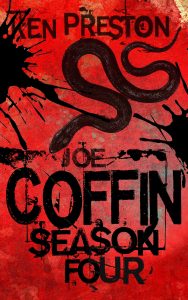 And it started well. Because, I’m telling you now, not much compares to the starting of a new book. Looking at that blank screen, hesitantly typing those first few words and then diving full on into the opening scene, knowing that this time, this time, the words will flow like clear, ice cold water down a sheer rock face.

Except they never do.

Still, I have twelve books behind me now and I know that if I keep my head down and just keep on putting one foot in front of the other, or in this case hitting one keyboard key after the other, and do that day after day every day, I will at some point in the near future have a book.

And it might even be a very good book.

It might be lacking a certain something. A little razzle dazzle. A certain glint in its eyes, or a hint of a smile on its lips.

In which case, the dreaded rewrite rears its ugly head and laughs in my face, its terrible halitosis washing over me and making me gag.

(Puts head in hands and proceeds to sob uncontrollably.)

Lawrence Block, again, compares rewriting to having run a marathon and then walking the whole course again looking for those lost keys you dropped on the way round.

Mr Block is a wise man when it comes to the art of writing books. Mind you, he should be, he’s been doing it for some sixty plus years.

So yes, I love writing and yet I hate writing.

But no matter how much I hate it, even at the worst of times when I am deep into a 150,000 word novel and I am convinced it is so utterly dreadful that I have not one syllable in my manuscript that is worthy of attention, I still somehow keep at it.

I suppose that means I’m a writer.