Joe Coffin first began life as a maverick cop leading a specialist team of vampire killers, in a world where vampires have always existed. Coffin, of course, never played by the rules, and neither did the small team of men he led. In fact, in this version of his character he owed a lot in physical appearance and character traits to Vick Mackey, leader of an elite task force within the police in that marvellous American TV series, The Shield.

Joe Coffin and his team used adapted crossbows to kill the vampires with, and the action was set in 1970’s Birmingham. I managed to put together names and character profiles for my team of vampire killing cops, and I even wrote the first chapter before it fell apart because it was all too derivative.

Lesson learnt: You can’t build your house on somebody else’s foundations, you gotta get out there and dig your own.

It took me another couple of months of rumination and false starts before Coffin arrived as he is now, but a big influence in my way of thinking was the BBC1 series Gangsters.

On air from 1975 to 1978, this has to be one of the best and most unusual shows put out on British television.

The BBC had a series called Play For Today, each episode a two hour long, standalone drama. Gangsters filled one of these slots, and it proved to be so popular that two series were made, before it imploded up its own backside and completely alienated its fans.

You can watch the opening scenes of the Play For Today feature here.

I vaguely remember catching Gangsters back in the 1970s. I probably tuned in to the second series, when it all went a little strange and surreal and self-reflexive. Let’s say it was 1978, this would have put me around about thirteen years old. It was on Friday nights, after the Nine o’clock News. My father was down the pub, and if my mother wasn’t with him then she was probably in bed or something, because I had the television to myself, and no one around to tell me I wasn’t allowed to watch a drama involving drug dealing and drug taking, violence, strippers, and a baddie called The White Devil, who declared that he knew 120 sexual positions but twelve of them involved the use of a fully equipped gymnasium.

This was when it was becoming very weird. The White Devil was played by Philip Martin, the show’s creator and writer, and looked and talked like W C Fields. In the penultimate episode he kills John Kline, and I know that’s a spoiler but seriously, you will have lost patience with the show long before this.

And can’t you see the symbolism there? The writer killing off his creation? Martin had wanted to finish off Gangsters for good, and makes another appearance in the final episode, this time as himself, throwing the pages of his script into the air in a celebration that it’s all over.

But that two hour drama, the first episode, that’s the one to go back to, the one to remember. It might be set in Birmingham, and filmed on TV cameras, but it’s really a wide screen American gangster movie, or a western. All tough talk and car chases and bruising fights, there’s even a nod to spaghetti westerns with the strippers at the club performing to the theme from The Good, The Bad, And The Ugly.

The late Maurice Colbourne played John Kline, released from jail in the two hour pilot’s opening scene, and out to get money owed to him and then clear out of Birmingham for a fresh start elsewhere. Of course it’s never that easy, is it?

Although it never occurred to me until much later, Joe Coffin’s first appearance in the book sees him being released from jail, with his own agenda to fulfill. His involves dealing out bloody justice on the lowlifes who killed his wife and son.

And no, it’s not that easy for him, either.

Although Gangsters was one of the inspirations for Joe Coffin, not much of it is visible in the finished work. The Birmingham setting is there, but updated to the present day, there are scenes set on the canal network, and there is a subplot involving Triads. Other than that, I can’t think of anything else.

But if it hadn’t been for Gangsters, I’m not sure Joe Coffin would ever have existed. 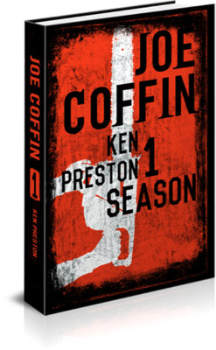