Well, hello there, and welcome to my brand new, shiny, sparkly website.

Please remember to wipe your feet on the way in though, don’t want you traipsing mud through the place when it’s hardly been open any time at all.

So what’s new? I hear you ask.

The whole thing, to be honest. It’s been redesigned from the bottom to the top, and the top to the bottom (or the sunlicked butterbuns as Corpse might say, but then if you haven’t read Joe Coffin, Season One yet you won’t have a single idea what I’m talking about. But more on that later).

Anyway, come on in, make yourself at home and take a good look around. It looks great, doesn’t it? Careful! The paint might still be a little wet over there.

I’ve got some nibbles over here, and would you care for a glass of wine?

All right then, if you insist.

Well, I’m pleased to say that the brand new website is up and running just in time to celebrate the release of Joe Coffin, Season Two. 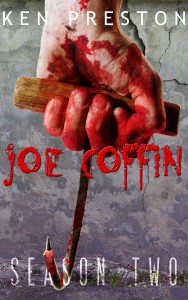 Yes, Joe Coffin is back, and not only facing down vampires, but a mystery tough guy who is intent on killing him.

As one particular reviewer so eloquently put it, ‘Joe’s big as a house, stronger than a horse, can take a beating and keep on kicking,’ which is particularly handy as Joe Coffin takes one hell of a beating in Season Two.

But any more than that I can’t tell you.

How about I let you read a snippet, instead?

Danny was telling them about his career as ‘The Butcher’. Neither Coffin or Brendan were in the mood for listening, but trying to shut Danny up when he got into telling his stories was about as futile as trying to mop up a pint of spilt milk with a plastic bag.

So they sat in silence, Brendan driving and Coffin gazing out of the window.

“Me and Mort, we go back a long way,” Danny was saying. “I still remember when we first met, would have been back in sixty-seven or sixty-eight, and Mort had got himself into a spot of bother. Joe, you remember Ron Wingate don’t you?”

“Before my time,” Coffin said.

“Yeah, of course it was, but you heard of him, right?”

“Yeah, I heard of him. My Dad used to talk about him on Saturday afternoons, whenever we were watching the wrestling.”

“A wrestler was he?” Brendan said, turning the steering wheel as he took a corner.

There was a thump from the back as something shifted, and slid across the floor.

“Take it easy,” Coffin said. “We don’t want the doors springing open and dumping a pile of corpses on the road.”

“Don’t you worry about my driving,” Brendan said.

“Not a wrestler, no,” Danny said. “He were a wrestling promoter, and manager. But Ron never worked behind the scenes, he liked to be up front, with his boys as he called them. By the mid-sixties, Ron were more famous than his boys.”

“And his son was a professional wrestler too, wasn’t he?” Coffin said. He’d heard this story before, but decided it was better to let Danny talk, maybe bring them down a little after the adrenalin rush of the fight at the club. Besides, listening to Danny talk was better than arguing with Brendan.

“That’s right, Johnny Thunderbolt he were called. His big moment in a fight was to climb up on top of the ropes and drop on top of his opponent, like he was doing a belly flop in a swimming pool. He was a big lad, twenty-two stone of rock solid muscle. When he landed on you, you weren’t getting up again.”

“Didn’t he wear a vest with a lightning bolt stitched across the front of it?” Coffin said.

“A lightning bolt?” Brendan snorted. “I thought you said he was called Johnny Thunderbolt?”

“He was,” Danny said. “But nobody could work out how to draw a thunderbolt.”

“Still, this kind of thing pisses me off, you know? Thunder and lightning, they’re two different things altogether, you know what I’m saying?”

Brendan took another corner and something shifted in the back again.

Coffin looked out of the window. Kept his mouth shut.

“Well, you get lightning in a thunder storm,” Danny said.

“Yeah, and that’s a lightning bolt.”

“They mean the same thing,” Coffin said. He was getting tired of this conversation, just wanted Danny to get on with the story.

“The fuck they do,” Brendan said. “You never hear of someone being struck by thunder now, do you?”

“A thunderbolt, isn’t that when lightning strikes the same time as you hear the thunder?” Hanrahan said. “Like when you’re right under the centre of the storm?”

“Thunderbolt, lightning bolt, who gives a fuck?” Coffin said. “Let’s just get on with the story.”

“Johnny’s career as a wrestler came to an end sometime around nineteen sixty-five. He was snorting heroin like it were popping candy by then, and it completely fucked him up. Ron tried to straighten him out, he were devastated that his own son had finished his wrestling career in such a sorry state, but it were no good.”

“Aye, the drugs have ruined many a man,” Brendan said.

“When it were clear Johnny was never going in the ring again, Ron approached Mort and asked him if there were a job for his lad in the Slaughterhouse Mob. Mort was happy to help out, he’d won big time on a couple of fixed fights that Ron had tipped him off about, and felt he owed him one.”

Brendan snorted again. “Bloody wrestling, it’s all a big fucking pantomime anyway, am I right? You remember that Jap bastard from telly in the eighties? Kendo Nagasaki? Fucker was English all along, underneath that mask.”

Coffin said, “Brendan, will you shut the fuck up, and let Danny tell his story?”

Brendan twisted in his seat so he could look past Hanrahan, and glared at Coffin. A car horn blared and Brendan turned his attention back to the road, swerving around a car turning right from the opposite carriageway.

More sounds of bodies sliding around in the back, and a thump as one of them hit the van’s side.

Coffin snapped his mouth shut, his teeth clicking together. He fought the urge to demand that Brendan stop driving and let Coffin take over. That would just degenerate into an argument, and then they seriously risked crashing the van. Besides, even if Coffin got his way he couldn’t fit behind the steering wheel, and he hadn’t tried driving a vehicle in decades.

You might have noticed the people in my novels like to talk. Joe’s a man of few words, and even he has to open up and talk on occasion. But there is plenty of action too.

Did I mention the action?

How about I direct you back to the reviewer I quoted earlier?

And in Season Two, you have it my friend, oh yes you do.

Joe Coffin, Season Two is out on October 31st, and available for pre-order on Kindle at a special reduced price of 99p/99c.

How can you resist that?

It has to be said that if you haven’t read Joe Coffin, Season One yet you’re not going to have a clue what’s going on in Season Two. Especially as the story picks up only minutes after the finish of Season One.

But never fear, I have you covered.

Because I’m giving away the entire first season of Joe Coffin ENTIRELY FREE of charge. (Yes, I know I over-egged that sentence terribly. But I don’t care, it’s my place I’ll do what I like.)

Just in case you missed that last sentence, I am giving away Joe Coffin, Season One, so you can try it risk free. The book is getting some great reviews, but now you can make your own mind up without spending a penny. All you have to do is give me your email address and you will get it right away. Kindle, Kobo, Nook, iTunes, I’ve got them all covered. Hell, you can even have it as a PDF if you want to. 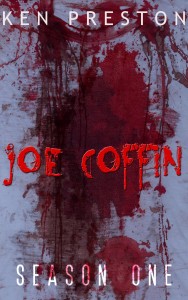 And if you really don’t want to be receiving my emails you can even unsubscribe and still keep the book.

But I recommend waiting until you’ve received my second email at least.

As I have another book for you.

That’s me, I just love giving stuff away.

So sign up, why don’t you? Here’s that link again.

Now, who’s going to pass me the peanuts?