You’ll probably say I imagined it. After all, my job is to sit here and make things up.

You’ll probably say that’s part of the problem. That it was a dream, or a vivid hallucination or daydream. That I’m spending far too much time on my own, in my own head.

You’ll say I need to get out more.

In the real world.

But I’m telling you, you’re wrong.

Everything that I am about to recount here is the absolute truth.

Not one word of it is a lie.

So, this is what happened.

It was Thursday morning and I was sitting at my writing desk in the cellar. The words had been coming hard that morning, slow, like they didn’t want to be dragged out into the world. Like they were resisting me.

I hate it when that happens. Writing a novel or even a short story shouldn’t be that hard. Especially after all these years of writing and publishing.

I was staring at my blank computer screen, maybe my brow was furrowed in concentration or frustration, I don’t know, I can’t remember.

But I was staring hard.

I heard a noise. Sort of like a little cough, a tiny asthmatic wheeze.

I turned in my chair, expecting it to be one of the cats coughing up a fur ball, and saw a young lad standing at the bottom of the stairs into my cellar. He was thin and dressed in dirty rags. He had shoes on his feet but they were in pretty bad condition.

To be honest my first thought was to worry about the carpet. You see, this lad, he was filthy and I was worried he would tread dirt into the new carpet.

“That’s all very polite and everything, you telling me your name like that, but just how did you get in my house?” I said.

I opened my mouth to say something along the lines of, ‘Don’t be an idiot,’ when I was interrupted by the sound of smashing glass from upstairs.

I pushed past young Jim, and boy did he pong, and ran upstairs.

A young woman, a girl really, was standing in my front room looking at the smashed glass of the window. She turned and looked at me.

“No!” Lee said, drawing the word out into an insult. “It was a dinosaur! I think it might come back soon.”

Dinosaur? What the hell was she talking about?

Wait a minute, I thought. Is she supposed to be—

I almost jumped out of my skin at the sound of his voice. I turned around and there was Jim, up from the cellar and standing in the doorway to my front room.

“Give me all this trouble,” he said. “Weren’t it enough that I were living rough on the streets already, and gettin the livin daylights beaten out of me by that Marchek Mulready? Did you have to go and get me involved with Caxton Tempest, and all those demons and black magic nutters?”

There it was then. This boy and girl, they were both characters out of my books.

“Well, I, erm, thought it would be an adventure for you.”

“An adventure?” Jim shouted. “That bloody demon Murmur almost ate me and my brother!”

“At least you aren’t being chased by dinosaurs and a man with one arm and a really bad attitude.” That was Lee, still staring at the broken window pane, maybe waiting for the dinosaur to come back. “I haven’t seen Daniel in ages, I really miss him. Did you kill him?”

“Of course not,” I said. “Don’t worry, he’s safe. In fact I’m writing the second Planet of the Dinosaurs book now.”

“It’s taken you long enough,” Lee said, not looking at me.

“Busy!” Jim shouted. “How can it take you over ten years to write a sequel? Do you realise how long I have been hanging around at Mr Tempest’s house, waiting to find out what happens next? I could have been at university now, taking a media degree.”

“A media degree?” I snorted. “What use is one of those? And besides, Victorian street kids didn’t go to university.”

A tall, imposing man stepped into the room. He had to duck as he walked through the doorway.

“Don’t listen to him, young Jim Kerrigan,” he said, and placed a protective hand on Jim’s shoulder.

Hang on, I thought. None of these people are real, they’re just figments of my imagination.

I opened the front door and began ushering everybody out. I had work to do, I didn’t have time for this nonsense.

The problem was, I had to stop when I got to the front door as I was overcome with the stink of rotting fish and stagnant sea water. I turned away to see the others recoiling and putting their hands over their noses. Before I knew it I was gagging and coughing and trying to keep my dinner where it belonged, in my stomach.

A voice spoke, and it sounded like it had echoed up from the very bottom of the ocean.

It said, “I am your humble servant.”

Oh no, I thought, not the Mousqueton sea monster.

Mousqueton stood in my front doorway, his flesh grey and streaked with sores, his eyes round and black. Rivulets of dirty seawater ran from his ears and eyes, from his nose and mouth, and his hair clung to his scalp. The tattered servants uniform he still wore undulated softly, as though alive with sea creatures never seen by man, things that lived at the bottom of the ocean. Every time he took a step his feet made squelching, sucking sounds on the ground.

He squelched into the house leaving puddles of dirty seawater wriggling with nasty little creatures in his wake.

I turned to run and tripped over something. I scrambled up onto my knees and then my feet and only risked a swift look behind to see what I had tripped over once I was running again.

Now, I already have two black cats, but this wasn’t one of them. This was Lucifer, the demon Murmur’s cat.

And wherever Lucifer was . . .

Ah yes, there he was in the kitchen, his evil eyes twinkling with baleful pleasure. He held his hands in front of him and clicked his long, filthy fingernails together making a sound like a coffin full of bones being shaken about.

I clutched at my chest, it was thumping so hard I thought I might have a heart attack.

If I was lucky.

Otherwise it was a case of remaining perfectly lucid and conscious whilst Murmur sucked my eyeballs out of their sockets.

“Time for what?” I said, and wishing I hadn’t asked.

“Time for coffee, of coursssssse,” he whispered, turning around and indicating the coffee machine.

Right then something caught my eye in the garden.

Something that got my blood boiling and had me seeing red.

I pushed past Murmur, disturbing a couple of cockroaches from his coat sleeves, and ran out of the back door.

Joe Coffin and Emma Wylde stopped kissing and turned to look at me.

“Didn’t I tell you he would?” Emma said, and punched him on the chest. “You big gorilla!”

“How long has this been going on?” I said.

Coffin lowered his head and shuffled his feet around a bit on the grass. “A little while.”

“I don’t believe this,” I muttered.

“Hey, it’s not our fault!” Coffin said, looking up. “You’re the one who got us both fancying each other and then you went and tore us apart and keep shoving obstacles in the way of us ever getting together.”

“But what about us?” said Lee. “I’ve been stuck in this world full of man eating dinosaurs for the last few years without a clue what’s going on, and poor Jim’s been chased by demons through the streets of Victorian London without any explanation.”

“And as for me,” Caxton Tempest said, “when am I going to get that back story you promised me? All these years I’ve been waiting and I still feel like nothing more than a . . . a cardboard cutout!”

Tempest started sobbing and Jim put his arm around him to comfort him.

“I am your humble servant,” Mousqueton said, although it sounded more like he gargled it to be honest.

A tiny crab fell out of his trouser leg and scuttled across the garden.

“All right, all right! I’m sorry!” I turned around in a circle so I could speak to everyone and held my hands in the air. “It’s not my fault! I’m so very busy. Don’t you understand?”

“No, you’re the one who doesn’t understand,” Jim said.

“Understand what? Help me to understand.”

“The thing is,” Emma said, “we were all fine until you turned up and started screwing around with out lives. It’s only because of you that I’ve been chased by vampires, gone of my trolley and wound up in a loony bin, been chased around a house by a naked man waving a machete and locked in a cellar with a couple of psycho coppers.”

Emma held up her hands. “No way, I’m not going there.”

“Hey, you know what?” I shouted. “It’s tough shit. I’m the writer here, the author. I created you lot, and it’s up to me what happens to you and nobody else.”

All of them, all these characters I created and loved as though they were my children, began advancing upon me.

And then the world grew dark as I fainted.

Now look, I know you don’t believe me, but it happened and I’m here back in my cellar, but I’m tied to my chair.

The others, all those figments of my imagination, are upstairs discussing me. I think they’re planning on making me write their stories the way they want them written. With a happy ending and crap like that.

Oh no, I can hear them now. They’re coming down the stairs.

If you’re reading this blog you’ve got to come and help me. 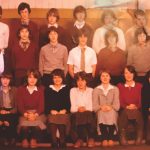