A couple of weeks ago, Thing Two attended a magic conference with his granddad, which involved a couple of nights staying away from home. This is actually turning into a regular occurrence. Anyway, with Thing Two away, I asked Thing One if he wanted to watch a movie, in particular something that Thing Two might not particularly like. That way we could watch it in peace, and not have to listen to a plaintive little voice saying things like, ‘How much longer before it finishes?’

You see, Thing Two doesn’t like to miss out on anything, even if he’s not particularly enjoying it.

He also feels he is old enough to watch anything he wants now, including 18 certificate films, (he’s thirteen), because:

A, He’s had sex education lessons at school so he knows all about that.

B, He attends a secondary school, so he hears all the swear words every day.

In a way you can’t fault that logic, which is why I wound up caving in and letting him watch The Big Lebowski.

Anyway, Thing Two was away, and Thing One decided he wanted to watch Once Upon A Time In The West.

Obviously I was ridiculously proud of him, and we watched all three hours of it and he loved it and I loved it all over again. Well, except for some very outdated attitudes towards women, which had me squirming slightly.

The next night I decided his film education should finally embrace the more schlock, B-movie end of the spectrum.

And really, there was only one person to look to for that, and his name is Larry Cohen.

Thinking about his filmography, I did initially consider God Told Me To, but decided against it. Even at age fifteen I didn’t really think Thing One was ready for that one. It’s Alive was also out of the question, for the moment at least, and that left me with one choice:

Yes, we’re back again with those films I shouldn’t have enjoyed, but did. It’s Guilty Pleasures #4: Q the Winged Serpent.

Michael Moriarty, Richard Roundtree, David Carradine, Candy Clark, Q the Winged Serpent is chock full of great B-movie actors. The film was rushed into production after Cohen was fired from directorial duties on I, the Jury. Having paid for a few weeks in his hotel room, and not wanting to see the money go to waste he quickly wrote a script, gathered a group of actors together, and shot Q the Winged Serpent in three weeks on the streets of New York.

Here’s the plot: Two New York detectives, Kwai Chang Caine and Shaft…no, wait, I mean…David Carradine and Richard Roundtree, are investigating a series of bizarre, ritualistic murders when reports start coming in of even more bizarre deaths. A window cleaner loses his head to start with and it just gets worse from there. Running parallel to this plotline, we also follow the adventures of neurotic small time criminal Jimmy Quinn, as he tries to extricate himself from the clutches of the Mob.

Yes, it all comes together in a bloody extravaganza of CGI madness, except this was 1982, before CGI was invented. With its distinctly dodgy stop motion flying lizard and green screen effects, it would be too easy to write this film off as corny, so bad it’s good, entertainment. But, as always with Cohen, there are other attractions. The gritty New York streets for example, and the on location film work shot guerrilla style with people in the background unaware they are extras in a movie. And then there’s the chemistry between Carradine and Roundtree and Candy Clark’s sympathetic performance as Michael Moriarty’s long suffering girlfriend.

Oh yes, Moriarty as Jimmy Quinn. You’ve probably never seen a performance like this one before. There’s a scene in a bar where Jimmy Quinn is auditioning at a piano for a job, but instead of playing lounge music like he’s expected to, he starts riffing and playing and singing scat instead.

And that, really, is his performance in a nutshell.

Q the Winged Serpent isn’t a great film, but it’s a lot of fun and I always admire Larry Cohen’s style of film making. The guy had a terrific imagination and a tremendous work ethic. And he sounds like he was a nice guy too. The reason he got fired off I, the Jury was because the production company was running out of money but still hiring crews for the work. Cohen knew a lot of these guys, had worked with them before, so he rang them and told them to get off the picture because they weren’t going to get paid.

Anyway, back to Thing One’s first experience with a Larry Cohen movie. I’m pretty sure he enjoyed it. He said he did, and he will watch anything I throw at him. I told him we’re going for the Seven Samurai at some point soon, and he just grinned and said, ‘Yeah, I’ll watch that.’

But there was one scene in Q where I felt a little uncomfortable. A young woman in a bikini decides on a spot of rooftop sunbathing. So she takes her bikini top of and starts massaging sun cream onto her boobs.

Again, I was cringing.

But then he knows all about sex and he’s seen a pair of boobs before, so I don’t suppose there’s any reason why he shouldn’t. 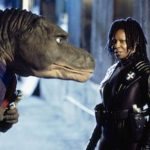 Four Dinosaur Movies You Do NOT Want To SeeMovies 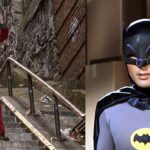