Guilty Pleasures #2: God Told Me To

For this week’s guilty pleasure in my back catalogue of ‘films I have watched but rarely mentioned in polite company,’ I’m going back to the 1970s again. But where Grizzly can bearely (geddit?) be defended as a decent film, God Told Me To does have its merits, not least an original script. 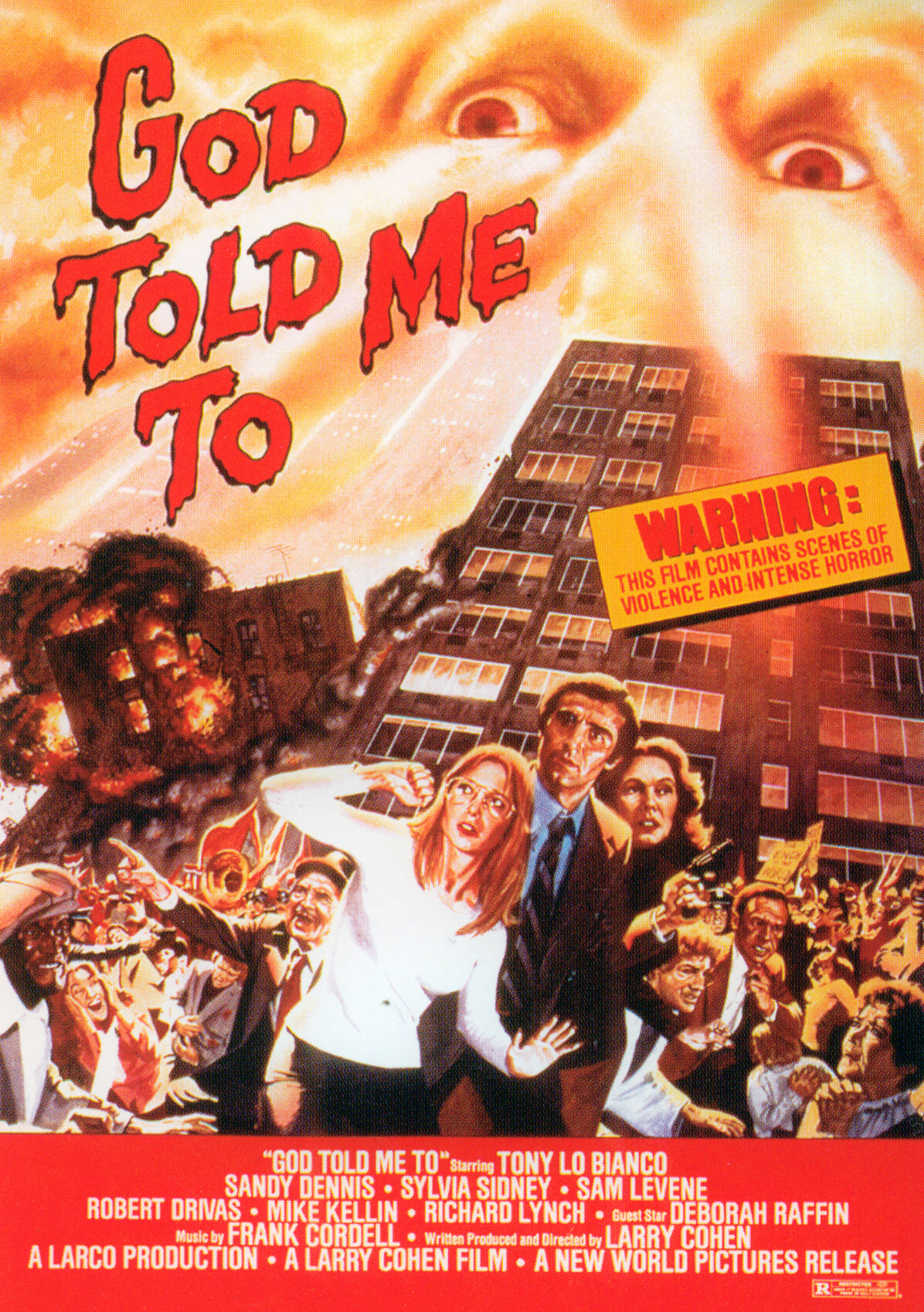 Written and directed by New York filmmaker Larry Cohen, God Told Me To is a thriller, a horror, science fiction, a critique of fundamentalism, and a deep dive into one man’s conflicted Catholic soul. Shot on the streets of New York, the film stars Tony Lo Bianco, one of the best character actors of the 1970s, and starts with a bang as a lone sniper sitting on top of a water tower picks off random innocents with his high velocity rifle.

Despite the daft tumbles that some of these extras take as they hit the ground (you can see the desperate earnestness with which these actors took to their few seconds of fame, arms flailing and legs wobbling as they die on screen – you can practically hear them thinking ‘This could be my big break, got to give it my all!’), this opening sequence is unsettling. Life and death are random, it seems to be saying, and completely out of our control.

It could easily be you next.

The police mass at the base of the tower and a helicopter is soon hovering overhead. Detective Peter Nicholas (Lo Bianco) climbs the water tower to try and talk the gunman down, and find out why he shot all these innocent people.

“Can you tell me why you did this, Harold?” Detective Nicholas says.

“You promise you won’t tell anyone else?” Harold says.

“I can’t do that,” Detective Nicholas replies.

And then comes the killer line.

God told me to.

When I first caught this film on TV late one night, back in the 1980s, it was still less than ten years old and I was a teenager. That phrase didn’t particularly mean anything to me then. Now, some thirty-five years or so later and with more of that thing called life under my belt, it means a whole hell of a lot more.

When I think of the words God told me to, my mind immediately takes me back to my years as a Born Again Christian. I believed in an interventionist God, a God you could petition for change, either in the world at large (world peace anybody?) or in your personal life (Dear Lord, could you find me a girlfriend please?). Back in those days homosexuality could be cured, speaking in tongues was common, Christianity was the only correct religion and everybody else had it wrong, Jesus was coming back soon and the words ‘God told me to’ were uttered often and with conviction.

God told me to read this passage from the Bible.

I had a dream and God told me to speak it out to you all.

God told me to pray for you.

God told me to knock on your door and ask you to give your life to him.

God told me to shoot all those people.

Okay, so I never actually heard anyone say that last one.

That was a period in my life, church twice on Sundays, prayer meeting every Wednesday, when I knew, absolutely knew, that I was in the right place, amongst the right people, and doing the right thing.

It’s funny but the older I get the less sure I am that I’m right about anything.

Larry Cohen was good at subverting the normal, at taking a good long look beneath the veneer of our lives. There’s a case to make that with God Told Me To he was ahead of the game, predicting the mass shootings in America that seem to me to be happening tragically more often. Or the terrorist attacks on the World Trade Centre, because surely God must have told them to do that?

Or even the far right Christian political scene.

Cohen was examining many issues with this particular film, one of them being that those who say ‘God told me to’ are deluded at best and dangerous at the other extreme.

But wait, this is a 1970s exploitation, low budget horror movie, right? Can’t we get away from all this serious thinking shit and onto the juicy stuff?

After all, this is Larry Cohen, the man who made Q-The Winged Serpent, It’s Alive and The Stuff.

Well, we could, but the problem is Larry Cohen liked his films to have a point, to have a meaning beyond the obvious. He loved to dress up his stories in horror and suspense and blood and guts, but there was always more going on. Always something for you to think about after the film had finished.

God Told Me To isn’t his best film. It has a terrific performance from Tony Lo Bianco, fantastic location shooting on the streets of New York city, and an unsettling vibe to it, like you get from Rosemary’s Baby.

The problem is it gradually descends into a confusing, ridiculous mess involving a glowing hippy, UFOs and an alien vagina.

Yes, I really did say the words alien vagina.

You get the sense that Larry Cohen was reaching for something, perhaps working through his own Catholic faith and beliefs, digging deep into his own murky soul for answers he was never going to find.

Unlike William Girdler, the director of Grizzly, Cohen wasn’t a schlock master out to make a buck by ripping off the latest blockbuster (although there is a case to be made for Girdler aiming for more) but a serious film maker and thinker who loved working in the B-Movie genre and subverting it.

Take, It’s Alive for example. A newly born homicidal baby goes on a rampage killing people. It’s as though Cohen got to the end of Rosemary’s Baby and thought, Wait a minute! This is where the film should be starting, not finishing! And yet Cohen still managed to take this ridiculous concept and not only make it terrifying but also explored issues of fatherhood and unconditional love.

Or what about The Stuff? A horror satire on commercialism and addiction.

And then there is his TV creation, The Invaders, about aliens living secretly amongst us with only one man who knows that they are here and wanting to destroy us. The only way of identifying one of these aliens was by looking at their hands – they couldn’t bend their little fingers.

Here is Larry Cohen talking about what that meant to him.

The extended pinky used to be a symbol of effeminacy . . . you know, the effete [person] holding a glass of champagne with the pinky extended? When this show was done back in the ‘60s, the homosexual community was kind of a submerged, invisible community. People were living secret lives. I thought, here are these aliens living amongst society, keeping their true identities secret, their true selves secret, and this is funny because the pinky kind of symbolises homosexuality in some way, and nobody will get the gag, but I’ll put it in there anyway.

After catching God Told Me To for the very first time back when I was an innocent teen I doubt I saw it again until I was in my forties. By that time I was back to thinking for myself again after my curious journey through the depths of Born Again fundamentalism. The film had a whole new meaning for me then.

Yes it’s a ridiculous mess but it’s still worth seeking out and watching.

Besides, I only wrote this blog post because God told me to.