When it comes to films, we all have our guilty pleasures.

Yeah, those films you know are rubbish that should not have passed the scriptwriting stage let alone gone into production. And I’m not talking here about loving a bad film because it’s bad, you know, that ‘it’s so bad it’s good’ type attitude. Some films are cool to like and having seen that particular film can be seen as a badge of honour. You’re part of a club.

But some films? Or that one particular guilty pleasure? That one you struggle to find anybody else who’s even heard of it, let alone seen it? That film you have to work hard explaining to other people that, yes, admittedly, it’s a crappy movie, but it does have some redeeming features?

It can be lonely loving and defending that kind of film.

That’s what I’m talking about when I talk about guilty pleasures.

I’ve got a whole closet full of them.

Time to man up and show you the first one. 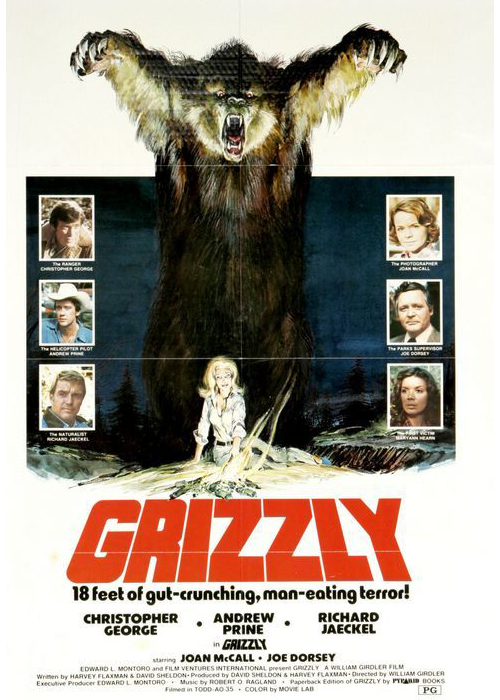 Now, I really shouldn’t like Grizzly. After all, it is a shameless rip off of my favourite film of all time.

Nuns On The Run.

Nope, that was a joke, obviously.

If you know me, or have followed my blog even sporadically, you will have realised a long time ago that I absolutely love Jaws and still consider it not only to be Steven Spielberg’s best film (sorry, Mr Spielberg) but also the greatest film ever made.

Now, I know you probably want to argue with me about this, and you have some other pick for title of THE GREATEST MOVIE EVER MADE, but no, we’re not going to discuss that today.

Because I’m right, and you’re wrong.

So you just need to get over it.

Anyway, back to Grizzly.

Rushed into production to cash in on the popularity of Jaws, Grizzly tells the story of a man-eating shark—no, sorry, grizzly bear—terrorising the popular holiday destination of Amity Island—nope, sorry again—a national state park. The Chief of police—wait, no, the national park’s chief ranger—wants the park to be closed but the mayor—apologies once more—the park supervisor, refuses. The chief ranger then teams up with an ichthyologist—nope, wrong again—naturalist to investigate the killings and head out onto the sea—sorry, I meant into the forest—with a tough old fisherman—wrong again—park guide in his battered old boat—nope, sorry—helicopter.

As you can see, the scriptwriter didn’t deviate much from the template he was working from. I have a sneaking suspicion he simply found himself a copy of the Jaws script and where it said shark he crossed it out and wrote grizzly bear instead.

I saw this film on its 1976 release, and I loved it. I think that’s understandable, when you consider that I was eleven or twelve years old and still riding high on the thrill that had been watching Jaws the previous year. You kids these days, with your streaming and films on demand, with your multi-channel TVs and your DVDs, you’ve got it easy. Back in the olden days, when a film finished its run at the cinema that was it, there was no other way of seeing it again until it was sold to a TV broadcaster. And the gap between a film being released at the cinema and then debuting on TV was up to five years!

So I was growing desperate for some more people-chomping monster type action.

Even as young as I was, even before I set foot in the cinema and planted my skinny backside in the seat and waited for the lights to go down and the curtains to open and reveal the screen, I suspected Grizzly would be a terrible film. There were two reasons for this.

One, it was an obvious rip off of Jaws.

Two, this was the 1970s, era of the exploitation movie. And we were loving it. In fact, I’m pretty sure it was that same summer we also saw that great double bill Carquake and The Giant Spider Invasion.

You’re probably unfamiliar with Carquake (original title Cannonball) but you will recognise some names attached to it: David Carradine, Sylvester Stallone and Martin Scorsese amongst others.

The less said about The Giant Spider Invasion the better.

Carquake though, that deserves its own post, so we will leave it there and head back to that National Park being terrorised by a grizzly bear.

Christopher George played the part of Kelly, the park ranger. No Roy Scheider, he was still a craggy faced, decent actor who knew he was starring in a big pile of steaming grizzly shit but, hey, it was work. And he was reunited with Richard Jaeckel, who was probably best known for his role in Baywatch, and Andrew Prine who is probably best known for, erm, Grizzly. These three actors had previously worked together on Chisum, a John Wayne film.

Christopher George also went on to star in The Exterminator, and this movie’s tagline was then taken by James Cameron and used in his 1984 breakthrough film, The Terminator.

‘I’ll be back,’ Schwarzenegger famously says, in The Terminator.

‘If you’re lying, I’ll be back,’ The Exterminator’s Robert Ginty tells his victim, as said victim dangles over an industrial mincing machine.

Arnold Schwarzenegger’s ‘I’ll be back’ was then referenced again a fair few years later by Arnie in Twins, only this time Ginty’s line was repeated almost exactly word for word, ‘If you’re lying to me, I’ll be back.’

Honestly, I could (and do) spend hours of my life disappearing down these rabbit holes.

The cinema I saw Grizzly in was packed, mostly with children. When I had seen Jaws the theatre had been packed then too, but that was where the resemblance between the two experiences ended.

When watching Jaws the audience had sat enthralled in a communal silence, interrupted only by gasps, screams, nervous laughter and finishing with a mighty roar and thunderous applause at the end.

The Grizzly screening was a much more riotous affair. Things were thrown at the screen, popcorn went flying as did fountains of fizzy drinks, and I’m amazed we heard any of the film’s dialogue over the talking, laughing and yelling that went on.

It wasn’t a cinema screening, but more of a wild party which happened to have a film playing in the background.

But somehow, despite all the noise and the distractions, I still managed to see enough of that film I sort of fell in love with it.

And yes, the eleven foot Kodiak bear nicknamed Teddy that performed as the killer grizzly actually looks rather cute when he gets his first reveal. In the early scenes the film’s director, William Girdler, who also directed Three on a Meathook, Asylum of Satan, Project Kill starring Leslie Nielsen and The Manitou with Tony Curtis, was obviously trying the Spielberg trick of hiding the monster to heighten the tension. Unfortunately it doesn’t work, and that paw that swings out from the side of the camera frame to strike at the beautiful young woman who is screaming her head off looks laughably fake.

Besides, the film’s trailer did away with any subtlety there might have been and fully revealed Teddy the Kodiak bear from the get-go.

Even so, as bad as it is, Grizzly did tremendous box office, earning over fifty times its production costs and raking in $39,000,000.

With Grizzly making so much money a sequel was inevitable, starring John Rhys-Davies, Louise Fletcher, and the teenage George Clooney, Charlie Sheen and Laura Dern. Due to a legal wrangle and the producer running off with the production money Grizzly 2: The Concert never got released, but you can catch clips of it online if you really feel the need to punish yourself in this way. 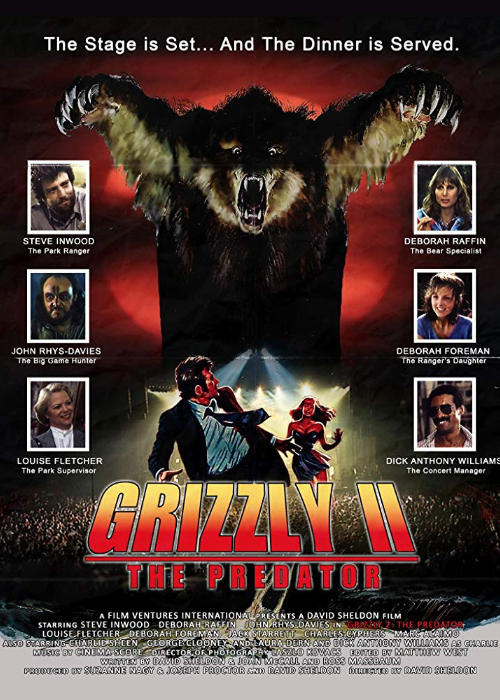 Grizzly remains a tiny blip in the history of movies, an independent feature that made big money in 1976 but was destined to be forgotten quickly, unlike the classic it slavishly impersonated.

I still sort of love it though.