Gristle and Bone, by Duncan Ralston

Looking at the cover and title of Duncan Ralston’s Gristle & Bone, a collection of short and novella-length stories from Booktrope’s new Forsaken imprint, you’d be correct in assuming that the theme is horror. The opening story, Baby Teeth confirms this expectation in a brutally gruesome fashion. I’m not sure I will ever be able to contemplate the miracle of pregnancy ever again without being reminded of that story’s horrifying and shocking ending.

But three dark and twisted tales into this collection and I began to detect a theme. One that transcends genre boundaries. You see, I think Ralston isn’t quite telling us the complete truth of the matter with that cover image and that title.

Because he isn’t writing horror stories at all.

He’s writing about the human condition.

And then he’s dressing them up as horror stories. 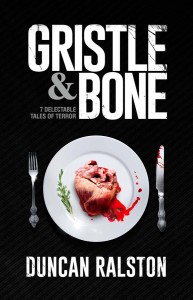 In the first story, Baby Teeth, Candace Murray is depressed that she cannot conceive, (at least he didn’t say barren) and a gulf grows between her and her husband as they both spiral into a melancholic, sexless marriage. I thought I could see where this story was headed, but then Ralston delivered a horrifying sucker punch at the end, whilst at the same time completely wrong footing me.

Beware Of Dog is the next tale, with Dean Vogel, recently dismissed from the armed forces and suffering from post traumatic stress, returning to his family in the eerily named Dark Pines. Dean starts seeing a psychiatrist, and is forced to confront not only his own damaged psyche, but the town bully too. Ralston skillfully weaves the past and the present into a single story, as we work our way towards a high noon type showdown with unexpected results.

To be honest this is not one of my favourites. I felt that the story was a little confused as to what it actually wanted to be, and the ending lurched into a completely different genre altogether from the one I had been reading. But one of Ralston’s strengths is his depth of characterisation, and this aspect of his storytelling skill shines through in Beware Of Dog.

Viral is story number three, about a youtube video of a depressed girl disappearing into the ether, scratching herself out of existence. Tara Maxwell, a wannabe serious journalist stuck writing the music column for a newspaper, decides to investigate. Ralston breathes life into the tired cliche of the hot young reporter chasing a story despite the opposition of the world weary newspaper editor, whilst skillfully negotiating a tale of teenage depression, lack of identity, guilt and redemption. There are no easy answers at the end of this story, which finishes with a weary dismissal and a return to the comfort of a warm bed.

They all had their jobs to do: Ugly Karl did the driving, Mad Bastard did the videotaping, and Meat did the girl.

This muscular prose continues, sketching out a supernatural tale of revenge, with some of the scuzziest characters I have ever come across in fiction. And yet, to Ralston’s credit, I actually cared about what happened to them. Down and dirty they might be, but Ralston gives them enough humanity to make them (just about) endearing.

//End User begins as a paranoid conspiracy thriller, when Mason Adler starts his day to find an email from himself residing in his inbox, with the subject line: READ ME. And of course, following in the footsteps of Alice drinking from the bottle labelled DRINK ME, and Neo swallowing the red pill to see “how far the rabbit hole goes”, Mason opens the email. Once again Ralston subverts expectations, turning this paranoid conspiracy thriller into a dark science fiction tale, in which he utterly and completely fulfills the promise he makes to us in the story’s opening.

June and David have driven to Monte Verde for their friends’ wedding in Fat Of The Land, and we first encounter them not quite having an argument. They seem to do this quite a lot, not quite have arguments. Their relationship is beautifully sketched out through their conversations and shared past history. We’re privy to June’s interior monologues, but not David’s, so we only ever get one side of the story. This tale of a relationship in which two people who aren’t quite right for each other but are struggling to make it work is deftly told, and when the horror finally arrives it almost seems an intrusion. But what horror it is. The clues are loudly signposted well ahead of the denouement, and the ending is none the worse for that.

Scavengers finishes off this collection of tales, narrated secondhand by the man to whom the horrifying crimes recounted here have been confessed to. It seems that we have the ending all sewn up and revealed to us right at the beginning of this story, but hang on in there, Ralston delivers one final sucker punch and leaves us with a whole host of unanswered questions by the time that last sentence has been read.

I love this collection of weird and wonderful tales, each one different from the previous. And this is where I really grind my teeth in envy, as Ralston seems to have the innate ability to tailor his style to the needs of any particular story. His writing can be as raw as freshly sliced flesh, or as subtle as a lover’s whispered secret. And he makes it work, managing to give the book as a whole a definite identity.

Ah, yes, identity, theme. What, exactly, is Ralston doing with this collection of stories? Is he writing horror? Or, as I said earlier, is he writing about the human condition, and dressing it up as horror?

And that is what makes them so horrifying.