Feel the Fear and Do It Anyway.

I first read Feel the Fear and Do It Anyway in 2013 or 2014, so that is about three or four years ago from my present moment in time. If you wanted to skip reading the book and go for the condensed version instead, well, all you need is the title. The title sums up the book’s message perfectly eloquently. But if you want the message to be expanded and filled in then you need to shell out the couple of pounds it will cost you to get a second hand copy off Amazon.

I suppose right now you might be thinking, Hang on, why do I even need this book in the first place? You’re the one who brought it up.

Well, if you are hesitating over some form of action you feel you need, or want, to take, or if your life is stuck in a rut and you can’t find your way out, or maybe you feel trapped in a job or a marriage, or if . . . well that list goes on. In other words, if now that I have brought this book to your attention you think maybe you could do with reading it then yes, you probably do need to read it.

Mention of this book had been cropping up in various seminars and training sessions I attended for work over the years, but I always resisted buying it. Seemed like too much self-help mumbo jumbo to me. But then June 2013 arrived and if you have been following this blog for some time now you know what that means. Yes, I had what we British like to refer to as a ‘a bit of a funny turn.’

In other words I had a breakdown.

In my quest to get better and beat the Black Dog once and for all I fully embraced the self-help industry and one of the first books I ordered, on the advice of my first counsellor, was Feel the Fear and Do It Anyway.

Now, I’ll be honest with you, it does get a little bit too New Age for my personal tastes in parts. But its core message is one that resonated with me and makes a hell of a lot of sense.

You don’t have to be brave to do something new or take action.

You just need to feel the fear and do it anyway.

Because that’s what everybody else does. All those successful people you envy for their fearless determination to get things done, they also feel the fear of failure, of making fools of themselves, whatever, but they go ahead and do it anyway.

I’ve been writing for years, but it is only in the last few years, since that ‘bit of a funny turn’ that I have actually started telling people I am a writer. Before that I used to pretend that it was nothing more than a hobby. That way I didn’t have to go public with my intentions to write and publish books that might actually, horror of horrors, sell.

You see, if you’re going to stand any hope of success in turning those dreams of yours into reality, you have to go public. You have to commit to the work and to the possibility that you might fail. In fact, failure is guaranteed along the way but failure is part of the learning process, part of the journey to success.

So I started saying yes, this what I do. I’m a writer.

It felt a little embarrassing at first, as though I was pretending to be a writer. But that’s also a good tactic to take too. Act like you are what you want to be. (This is also a good tactic for poor mental health. Feeling down and depressed? Haul yourself out of bed and plaster a smile on your face anyway. Get asked how you are by someone, tell them you are great. Often you wind up feeling the way you are acting.)

So yes, I started telling anyone who asked, I’m a writer. And I started writing more, too. I set myself a schedule, started treating it like the job it is. Next I started reading my work out loud at open mic events. This had a twofold positive effect. One was that my confidence in public speaking began to grow and secondly I began to meet other people, not just writers but readers too.

Then in 2016 I saw an opportunity to join Writing West Midlands as on of their assistant writers at their Spark Young Writers’ groups. This was voluntary and I had to apply for it and interview too. But I got it and spent a year volunteering at their Wolverhampton group, but now in 2017 I am leading a group and I get paid for it.

As I reached out and met more people and took more opportunities, more opportunities and people began reaching out to me. I now run three different creative writing groups (and I get paid for all of them), I host an open mic event at Waterstones in Birmingham and I have been contacted by people asking for my help and advice with publishing and writing.

Much of what I have done over these past few years since 2013 seemed to culminate in an experience I had on Friday evening. The year before I had been contacted by a member of the Soroptimist International (a charity organisation that exists to enable women) and asked to speak at their Literary Annual Dinner.

A year can pass you by very quickly.

The event was held at Hagley Golf Club, a black tie do with a three course dinner. There were three authors booked to speak, Gillian McAllister, a Sunday Times top ten bestselling author and Aaron Wilkes, an author of children’s text books and published by Oxford University Press.

I was on last.

Aaron and Gillian were both great, interesting and funny too.

And then it was my turn.

I thought I would be nervous when I got up to speak, to over a hundred people by the way, but I wasn’t. I was calm and confident in my material and my ability to deliver it.

And I had a great time.

The entire evening was good fun.

The next day I was buzzing from the high of it. And it was then that it occurred to me that a few years ago I never could have envisaged myself standing up in front of all those people and delivering a fifteen minute talk on writing.

But I had, and it was all because of that slow but steady accumulation of new experiences. Of finding those new opportunities and saying yes to them.

That’s the message for today.

Feel the fear and do it anyway. 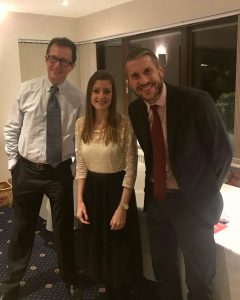