You can see it immediately, can’t you? The clear break in those two bones, the radius and the ulna. Even without an X-ray you would be able to tell that there was something very wrong with that arm. That it was probably broken and needed immediate medical treatment.

Or at least this is what depression looks like to me.

An X-ray of my inner emotional and mental state, if you will.

The problem is, depression is much harder to diagnose and treat than a broken arm. Neither do you get people visiting with treats and gifts and cards and flowers, people laughing and joking and commiserating and sympathising. And there’s no cast for friends to write stupid messages on and silly drawings, or just to sign their names

You’ve probably heard this story before. You may even have seen the photograph before. I’m not going to go through it all again, because I’ve told this story a lot. About how I slowly and without realising what was happening sank into a debilitating depression. A period of my life where I hated myself so very much that all I could think about was . . . well, you know where I’m going with that, don’t you?

That photograph? I put that together during my recovery period. It accurately represented how I felt at the worst points of my illness. Naked, in every meaning of that word, alone, despairing, and being taunted, mocked and laughed at by myself.

Even in its raw state, when I had first put the different elements together, I felt like crying when I looked at it.

It was just so bloody accurate.

We are getting better at talking about mental health.

But we’re not there yet.

We still shy away from anyone who might be afflicted with depression in its many forms.

It’s not catching, you know.

You can’t pick up a dose of depression from forgetting to wash your hands.

And why do depressed people never receive any ‘Get Well Soon!’ cards?

Depression is also one of the few illnesses I know of where many of the afflicted do their very best to hide the symptoms. As though we are living in a zombie apocalypse and they have just been bitten by a zombie but need to hide the bite because if they reveal it they know their friends will despatch them with a quick shot to the head.

That’s been known to be used by people as a self-prescribed cure for depression actually.

But it’s kind of permanent and self-defeating.

I’m much better now, fully engaged and positive, connecting with those around me and doing my best to create on a daily basis.

I still take 150mg of Sertraline a day though. Started off at 50mg. Quickly went up to 100mg and recently moved on to 150mg.

I’m hoping I stay there.

The truth of the matter is, there is a lot more to beating depression than taking magic pills.

And, for me in particular but I would hazard a guess that this would work for most people, the main strategy that works for me is creativity.

And physical exercise outside.

And being present in the moment.

And connecting with others.

Turns out I couldn’t just pick the one.

I made another one of these photographs to illustrate how I felt at the time.

Sometimes I think about making more.

I’m not depressed anymore, but the weird thing is I can still remember exactly what it feels like. It’s not like breaking an arm or trapping your thumb in the door. The mind is conditioned to forget that kind of pain.

But the pain of depression?

Oh yes, I can still remember that.

And I know that old Black Dog is still hanging around outside, waiting for a chance to get back inside so he can sit faithfully by my side once more.

Some times I even think I hear him scratching at the door.

For the moment at least, that door is strong and firm and locked shut.

But yeah, I still remember how it feels.

So, if you know somebody who is suffering with some form of mental ill health, please do this for me:

Don’t ignore them because you don’t know what to say. Sometimes it’s just as important to sit with a person and say nothing as it is to try and dispense words of advice or comfort. In fact, it’s kind of more important. Because, in your presence and your silence you’re saying, I might not know what to do to help you. I might be helpless in the face of your utter misery. But I love you. And I’m here for you.

By admitting that you haven’t got a clue what to do, you’re sort of making yourself vulnerable too.

That’s a powerful kind of love. 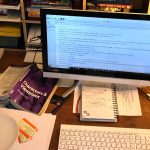