Authors Fighting is not a Pretty Sight

Yesterday I attended the Burton Sci-Fi and Fantasy Con.

The result of this is that two things happened for the very first time in the entire universe.

Now, I know this is not exactly earth shattering news. Your day isn’t going to be changed by either of those two facts. The earth is still spinning and the British government is still sinking beneath its own weight in nonsensical debates about Brexit.

But, for at least two of us, this was a pretty big deal.

I’ve known Angeline Trevena for a few years now, but purely on-line. Angeline is the author of several dystopian urban fantasy novels. Deciding she wanted to branch out in new areas, she set out to organise a Sci-Fi and Fantasy convention in her local town. At first it was going to be a low key affair, featuring a few author friends. But it blossomed and bloomed and grew until she had nine authors, Warhammer and Dungeons and Dragons workshops, actor Martin Ballantyne, and Cosplayers, amongst other things which I have probably forgotten.

And it was brilliant!

And just as brilliant was finally getting to meet Angeline in real life and realising, just as I had always suspected, that she is a lovely, warm-hearted person with oodles of generosity and positivity lighting up the day.

The convention ran seamlessly, (Angeline, if you ever decide to give up on being an author, a future in events management surely awaits) and I got to meet lots of new people and catch up with some I hadn’t seen in a while.

I even sold some books.

Unfortunately I got into a scrap with bizzaro fiction author Duncan Bradshaw, but fortunately horror author and publisher Justin Park was there to calm us down and make the peace.

I’m definitely booked in for Stokercon in April 2020 and possibly making a couple of appearances at my local library, one of which will be to celebrate World Book Day. Other than a couple of school visits, that’s it for the moment.

With my business head on (or at least in my case what passes for a business head) and looking at my sales figures, I broke even yesterday. Nothing to brag about, right?

But, I made couple of new contacts with possibilities for further work/exposure/networking potential.

And, it was just so much fun!

Maybe I should think about setting up a Sci-Fi and Fantasy Con in Stourbridge.

What do you think? 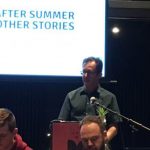 Some days don’t go to plan, but then some do.Appearances