I attended the National Writers’ Conference yesterday, one of my favourite bookish events of the year. Held in the Bramall Music Building at the University of Birmingham, the conference is a wonderful day of panels and talks and the chance to meet old friends and make new ones in the creative writing sector.

One of my favourite sessions of the day was Performing Writing, chaired by Antonia Beck, Birmingham Literature Festival Director, with poets Jo Bell, Bohdan Piasecki and poet and author Luke Kennard on the panel.

Having performed a fair few times at local open mic nights, and also being the co-host of Tilt Open Mic along with Rick Sanders, I was keen to hear what others more experienced than myself had to say on this subject.

What a brilliant session this turned out to be, my favourite of the three I attended. The panelists peppered their discussion with anecdotes and humour, and they worked well together. I don’t know if they had met before today but there was a lovely chemistry between them.

Anyway, this all got me thinking about my own adventures at open mic nights.

My very first performance was at Southcart Books, in Walsall. A tiny venue with me sitting and reading to a small group of people, I was nervous as hell. I can’t even remember what I read now, but I do remember thinking as I continued to read out loud, Everybody’s bored, I could just get up now and leave and nobody would notice because they have all tuned out.

Of course I didn’t, and I received a polite round of applause at the end which at least meant that no one had fallen asleep, or if they had they had woken up in time to clap.

Anyway, refusing to be put off, I continued to perform at Southcart until, about six months later, I performed for the first time on a stage and behind a microphone at Permission to Speak in Stourbridge, run by the wonderful Rob Francis.

Not knowing the crowd that well, having only been once before, I took the slightly risky decision to read How to Eat a Car, an outrageous, profanity laden, politically incorrect tale of a man attempting to eat a car.

You can read it yourself here if you haven’t come across it before.

Well, I got up there behind that mic and launched straight into my story. I might have told them the title, but I’m not sure.

When I got my first laugh I started to relax.

When I got my first eurghh of disgust I started enjoying myself.

When I got to the end and heard the gasps of horror, followed by riotous applause, well, I felt like a rock star.

I was, and remain, addicted to performing at open mic nights.

But I don’t always get the reception I received for How to Eat a Car.

Take the night at Waterstones when I read a scene from my book, Joe Coffin Season Two.

The scene in question is a story within the novel’s story, and is narrated by one of the characters, which makes it nice and neat and self-enclosed, ideal for performing.

The problem was, with its (again) politically incorrect language and casual racism and sexism on the part of the narrator, it didn’t exactly fit comfortably with the beautiful, lyrical poetry that had been performed that evening.

In fact, I started off well by illustrating how out of place I felt with an anecdote involving my wife, her friends, dressing up, broom handles, a castle, the You’re a Pink Toothbrush, I’m a Blue Toothbrush song and a prayer meeting. I had the audience in the palm of my hand as they laughed helplessly, singer/songwriter Jessica Law almost falling off her chair she laughed so hard.

And then I read from Joe Coffin.

I do think there are a couple of funny passages in that scene. And I have got laughs before, especially the moment when the three men argue over the difference between a lightning bolt and a thunder bolt.

But the passage of writing does highlight the inherent racist attitudes of Danny ‘The Butcher’ Hanrahan in particular and with a couple of members of the audience being black I certainly felt uncomfortable when I took my seat again.

So, I received a polite round of applause and the evening continued and no one complained.

But I still think about that evening and my performance.

And how we separate the art from the artist, and what is suitable for performing and what isn’t, and how far should my choice of material to perform be dictated by the cultural makeup of the audience.

Well, there’s a whole new blog post to be written there, but not now.

What I do know is I will continue performing my work, looking for new audiences and venues and seeking more . . . what?

I mentioned earlier that I was and remain addicted to performing at open mic nights.

And yes, there’s another whole new blog post waiting to be written about why that should be so. 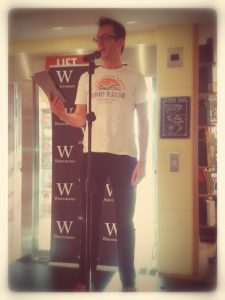