Scott and Amy Carter did it again, hosting another fun day at Southcart Bookshop with food, drink and plenty of authors reading tales of love and romance gone wrong.These events are a regular fixture at Southcart Bookshop in Walsall. Perhaps the only true independent bookshop in the West Midlands they are hidden away down a side street just on the edge of the town centre. But really, they are not that difficult to find and once you are inside you are presented with an Aladdin’s cave of treasures. 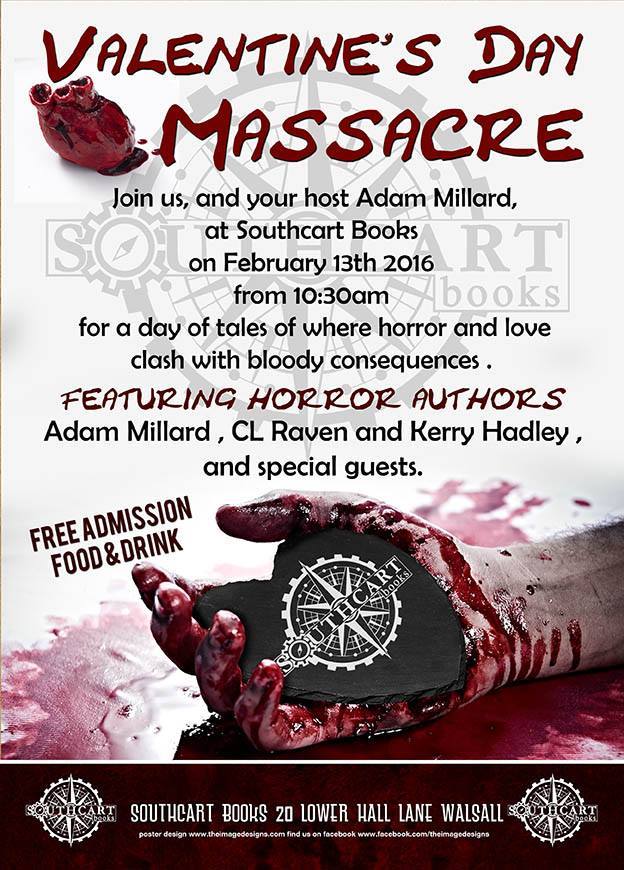 February’s themed event was the Southcart Valentine’s Day Massacre. You probably get the idea of the theme from the title alone, right? We’re not talking love and flowers, sweetness and light and chocolates.

Our event host was Adam Millard, author and small press publisher, at Crowded Quarantine Press. Looking fearsome with his tattoos, piercings and purple Mohican you honestly couldn’t find a warmer, funnier person to sit down and have a chat with.

Kerry Hadley-Pryce kicked off the readings with an excerpt from her novel The Black Country. Named by The Independent as being the Debut Fiction Book of the Year in 2015, we were treated to a tension filled scene of our two protagonist’s hunting for clues to the whereabouts of a friend they think they might have killed in a hit and run accident. The scene is written in an odd, third/first person point of view, as though there is an invisible narrator with them, or the couple are telling their own version of events at a later stage. This is all part of the book’s mystery, part of its tension.

Adam Millard was up next, reading two twisted stories of love gone wrong. The first, in which a sleazy, self obsessed creep by the name of Adam stalks an innocent young woman called Zoe (Zoe is Adam’s wife) was by turns hilarious and disgusting. I have to confess I will never be able to look at a can of WD40 in the same way again.

CL Raven took their turn next. Twins (and I still don’t know their actual names yet) they read a series of excerpts from stories of twisted horror and obsession, turning the concepts of love and valentine’s day on their heads and inside out. They took turns in speaking and in reading paragraphs and lines of dialogue, truly becoming the single author they present themselves as.

Jessica Law wowed us as usual with her blend of kookie songs (accompanying herself on the mandolin) and her asides about her life. I particularly enjoyed her ‘tragic’ story behind the scarves she was trying to sell us. And again she brought her terrifying Octokittens with her.

I was last but one on the list of authors reading and decided at this late stage not to read the nasty tale of a lover’s revenge that I had written especially for the event. It just didn’t sit well with me, and instead I went with Drive Fast She Said!, from my collection Population:DEAD! and other weird tales of horror and suspense. It went down well and I finished with a piece from Joe Coffin Season One, featuring that lovely couple Stump and Corpse.

There was food and conversation and many laughs, and if you’re a book lover and you haven’t been to one of these events yet, you really should.