Look at these fantastic reviews for Joe Coffin!

I know, I know, I really shouldn’t be blowing my own trumpet like this. It goes against every instinct in my body.

If you haven’t come across Joe Coffin

yet, well, here’s what us professionals in the writing business call a ‘blurb’. (Nope, I don’t know why it’s called that either.)

On the day that Joe Coffin, hitman for Birmingham gang The Slaughterhouse Mob, is released from jail he has nothing but murder on his mind. While inside his wife and young son were killed, and now he is out for bloody revenge. The problem is, Coffin’s enemies are circling, and his wife might not be quite as dead as she should be.

Joe Coffin is a vampire horror story and a gritty gangster thriller, written TV style in episodes and seasons. If you liked Breaking Bad and Dexter, and if you prefer your vampires bloody and brutal, then you will love Joe Coffin. With a fast paced, multi character storyline, smart dialogue and great characters, the Joe Coffin books are written to be binge consumed, just like those TV shows you love.

Now here’s the thing: although us writerly types like to sit in our writing caves and blather on about how we do it for the love of writing and we only write the book that matters to us and we really seriously absolutely do not care what anybody else’s opinion is about our masterpiece, can I let you into a little secret?

We actually care very much about what our readers think.

So, here are a sprinkling of snippets from some of the reviews I have been seeing on Amazon for Joe Coffin, Season One 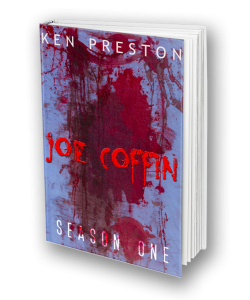 The writing is tight, and the transitions between scenes are as smooth as they are on TV. Preston writes action in a way that you can easily imagine, and his characters are complex and well-drawn. There are some really nasty creations in here. Stump and Corpse come immediately to mind as two of the most imaginative creations I’ve seen outside of a Clive Barker novel.

Loved, loved, LOVED IT! This book was fantastic, lots of action, suspense and adventure. I couldn’t put it down.
Ken is a wonderful writer. He does such a descriptive story, that it’s like a movie in your head! Some other reviewers said
it should be made into a TV show and I agree. Joe is my new favorite character. A killer with a heart. I did so much gasping
out loud and shouting ” Kill him Joe!” that my husband had to find out what I was reading. Now you know an author is good
when that happens. I have already recommended this book to my friends, and now I recommend it to you.

ABSOLUTE KICKASS THRILLER!! Think Romero with a better twist or twisted mind! Not for everyone but it sure fed the need for speed and Gore! Fast paced horror thriller…Joe Cotton’s just out of jail and he wants revenge for the rampage murder of his wife and young son. Joe’s big as a house, stronger than a horse, can take a beating and keep on kicking. Vampire rumors, missing persons, violence, blood soaked rooms, gore and more: check!! WAITING FOR KEN PRESTON TO ROCK HIS ROLL WITH MORE JOE COFFIN and BLOODBATH & FANG DRIPPING GORE!!

And, just in case you haven’t got the message yet, here are some snippets from reviews for Joe Coffin, Season Two

Preston’s story and writing are top-notch. Interspersed among the sex, violence, and gore, are moments of humor and buffoonery. The old gangsters joining forces to take back the vampire-infested club is a scene to make Joe Pesci proud. Even though, in this case, the aged mob henchmen are more akin to HOME ALONE Joe Pesci than CASINO Joe.

Loved it! I couldn’t wait for this book to come out, and it definitely didn’t disappoint.
It’s as good as, maybe even better, than Season 1. Joe,(who is my new favorite character), is back and badder than ever.

I am becoming a big fan of Joe Coffin. Just like season one, I tore through this book. I want season 3 right now. I’m not even much of a Vampire fan. Very highly recommended.

I love you all.

If you haven’t read Joe Coffin yet, you need to get reading right now because I am hard at work on Season Three and you don’t want to get left behind, right?

But also, you’re in luck, because I am giving away the ebook copy of Season One ABSOLUTELY FREE! (That’s right, I just shouted. I don’t care.)

Just follow the link below and within seconds you can have Joe Coffin on your Kindle, your Kobo, your Nook, or whatever the heck you read ebooks on. What the hell, you can even have it as a PDF if you want.

So what are you waiting for?